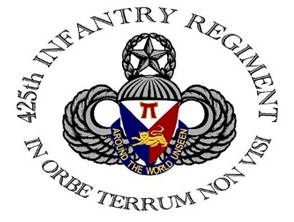 Renew your Membership and Shop Online on the Regimental website

The 425th Regimental Association has joined the ecommerce age! You can now renew your membership online through the Membership Center on the Association website.

You can also purchase Regimental clothing, coins, license plates, and decals through the Regimental Quartermaster Store. We accept payment by PayPal, Visa, and Mastercard.

Once again David Lincicome will be leading the charge for our parking project at the Willow Run Airport.   It will be the weekend of 29-30 August.  As in the past the Association will receive funds for our coffers in accordance to the number of volunteers we have working the parking concession.

We have done well  the past several years. This fund raiser is one of the reasons that the Association is in a strong financial position and can conduct some activities at a loss. We need YOUR help as a volunteer for this event. Let’s make this another banner year.  You can work both days or just one and get  to see the air show free.

Workers will receive their choice of a  free 425th Association hat, T-shirt or license plate.   For more details or to volunteer contact David Lincicome at s4@425regiment.org. 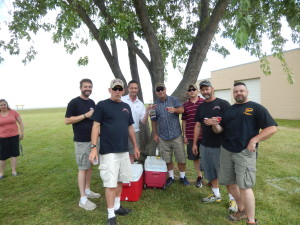 Once again we had a great time at the joint picnic with the 82nd Airborne Division Association. There was plenty of food and drink. We were able to catch up with comrades from the past and meet new comrades who were in the unit before or after our own time. Unfortunately the parachute jump scheduled for 1500 was cancelled due to high winds (nothing we have ever experienced!), but that did not prevent people from having a good time. 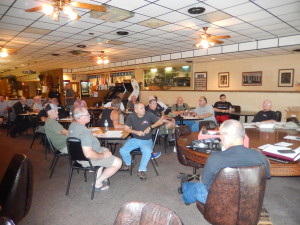 There was a general membership meeting in the Club Room of the Bruce VFW Post. The minutes from that meeting are at the end of this newsletter.

“The term “active duty” means full-time duty in the active service of a uniformed service for more than 30 consecutive days”.

Beginning in January 2016, DFAS will provide IRS Form 1095-C to all U.S. military members, and IRS Form 1095-B to all Retirees, Annuitants, former spouses and all other individuals having TRICARE coverage during all or any portion of tax year 2015. An IRS Form 1095 documents you (and your family members, if applicable) have the minimum essential coverage.  More information will be forthcoming about the delivery method of these forms.

You can find more information about the impact of the Affordable Care Act on your federal income tax at: http://www.irs.gov/Affordable-Care-Act.

We are making plans to hold a Reunion Dinner at the Bruce VFW Post on Friday, October 23. The cost will be $30 per person. This will be a catered buffet dinner with an open bar. This is NOT a formal Dining Out, but an informal “Reunion Dinner.” We hope that this will be an opportunity for both members and their wives to enjoy the camaraderie of Company F. Look for an invitation via email and Facebook.