Today marks the 67th anniversary of the Normandy Invasion.  While many brave soldiers, sailors, and airmen died on that day, let us remember those brave men of the 2nd and 5th Ranger Battalions.  It was on this day that many brave Rangers gave what Abraham Lincoln called,  “the last full measure of devotion.”  John 15:13 says, “Greater love has no 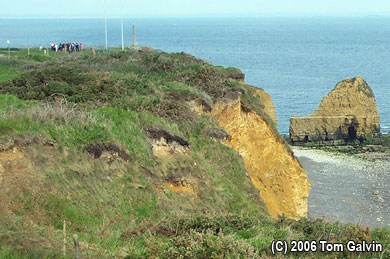 one than this, that he lay down his life for his friends.”  These Rangers put their lives on the line, and many gave the last full measure of devotion for their friends and comrades, their unit and their country.

It was in January of 1944, when GEN Omar Bradley gave LTC James Rudder, commander of the 2nd Ranger Bn the mission of capturing Pointe-du-Hoc.  Bradley finished by saying, “It is the most dangerous mission of D-Day.  LTC Rudder, replied, My Rangers can do the job.” 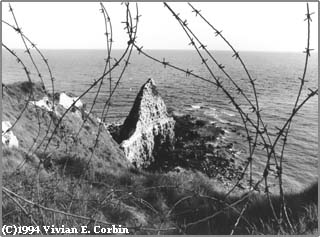 The plan was for Task Force A to assault the cliffs at Pointe-du-Hoc, and once successful send a message to Task Force B to follow on as the second wave.  If Task Force B did not receive the signal by 0700 they were to land after the 29th Infantry Division on Omaha Beach and move overland to Pointe-du-Hoc to reinforce the 2nd Bn.

The 2nd Bn ran into more opposition than expected and took longer to take the cliffs and consolidate their position.  By

the time the signal was sent to Task Force B, LTC Schneider has already shifted the force to land on Omaha Beach.  This meant LTC Rudder and Task Focre A had to “hold until relieved” with a bare minimum force.

Task Force B landed in the middle of “Bloody Omaha” where assault waves of soldiers were stacking up against the seawall and the tide was coming in.  It was during this point in the assault when BG Norman Cota, Assistant Division Commander of the 29th Infantry Division said to the troops on the beach, “Don’t die on the beaches, die up on the bluff if you have to die, but get off the beaches or you’re sure to die”  Cota turned to LTC Schneider, telling him, “I’m expecting the Rangers to lead the way.”  That was the beginning of the motto, “Rangers lead the way!”

Decades after the formation of the 1st Ranger Battalion in Scotland, Rangers continue to lead the way in Operation Iraqi Freedom and Operation Enduring Freedom.

“Greater love has no one than this, that he lay down his life for his friends.”

1 Response to 67th Anniversary of D-Day