P-38 Was More Than Just a Can Opener

Before the easy-to-open packaging of today’s Meals, Ready-to-Eat, a soldier’s ration came in steel cans – which were opened using the P-38 pocket can opener.

While the Army has not issued P-38s for at least ten years, soldiers still carry them, and they remain on Army icon.

The Subsistence Research Laboratory of Chicago developed the P-38 in summer 1942. The Army’s K-ration came with a key opening system, but the soldiers disliked it, and their complaints prompted the Quartermaster Corps to seek an alternative. The result was a small, folding can opener.

It was first issued in 1943 as a part of a ration item known as the Hospital Five-in-One. It became the standard issue with the G-ration in June 1944 and was subsequently issued with all Army field rations. 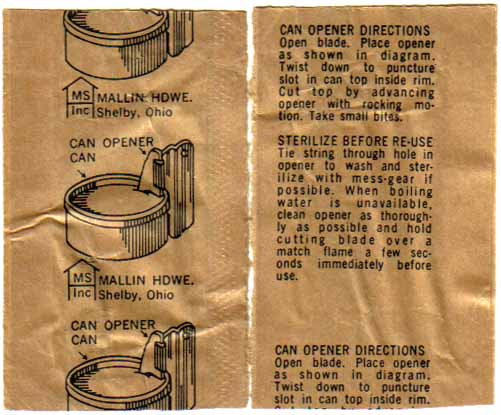 Some World War II soldiers called the 1 ½ inch long device the “John Wayne,” since the actor demonstrated how to use it in an Army training film. Soldiers didn’t need to watch the film, though, because the instructions printed on the can opener’s pack showed how easy it was to use.

Although “Opener, Can, Hand, Folding” is its official Army nomenclature, it soon acquired the popular name P-38. Historians disagree as to which of three theories explains this moniker. One is that soldiers called it the P-38 because it could open a can faster than the P-38 Lightening fighter plane could fly. A more likely explanation is that “38” refers to the length of the can opener, which is 38 millimeters. It also is possible that “38” was the number of punches it took to open a ration can.

The P-38 was designed to be disposable; the Army assumed soldiers would throw them away after opening their rations cans and began putting a P-38 in every individual ration accessory pack.

But no smart soldiers ever discarded his P-38. Many troops hung one with their dog tags around their necks. A situation would always arise in which they wouldn’t be able to eat because they did not have a can opener.

Once the Army realized that most soldiers were saving the device, it started placing fewer of them in each case of C-rations.

Although soldiers kept the P-38 to open their rations, the device proved to be an invaluable field tool. According to an article published by then Major Renita Foster published in the Pentagon’s pentagram newspaper in 1986, the P-38 could clean muddy boots, tighten screws, strip wires, trim threads on uniforms, and sharpen pencils.

The P-38 disappeared as an issue item when the Army went to the MRE in the mid-1980s, but soldiers who had them kept them. Some soldiers still carry the P-38 – especially on the key rings. The P-38 remains for many a symbol of army life.