The Man with the Rifle Knows 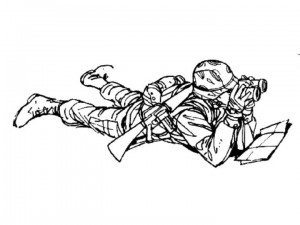 Men may argue forever on what wins their wars,

And welter in cons and pros,

And seek for their answer at history’s doors,

But the man with the rifle knows.

He must stand on the ground on his own two feet,

And he’s never in doubt when it’s won,

That’s his test, when the fighting is done.

When he carries the fight, it’s not with a roar

It’s creep and crawl in the earthen floor,

Butt down and holding his breath.

Saving his strength for the low rush,

And the whispered prayer, before he goes in,

Of a man who does what he must.

And when he’s attacked, he can’t zoom away,

When the shells fill the world with their sound,

He stays where he is, loosens his spade,

And digs his defense in the ground.

That ground isn’t ours till he’s there in the flesh,

Not a gadget or bomb but a man.

He’s the answer to theories which start afresh,

With each peace since war began.

So let the circle of argument rage

On what wins, as war comes and goes.

Many new theories may hold the stage

But the man with the rifle knows.

1 Response to The Man with the Rifle Knows