The Deactivation Ceremony (End of an Era, Part II)

Sunday, 12 June 2011, was a day we all dreaded to see arrive.  It was the day of an event we had all fought as hard as we could to keep from happening, but it did. 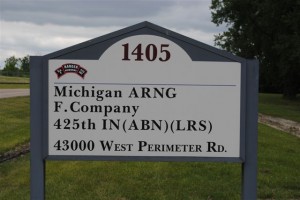 Few Rangers that still remain in the unit as most have been reassigned to other units or gotten out.  The mood was somber as former members watched the unit prepare for their final airborne operation.

No one was surprised that the jump came off perfectly and with no injuries. Three flights were made and five sticks were dropped.  However there were so few jumpers left in the company that everyone got at least two jumps.

At 1400 hrs the deactivation ceremony took place on the lawn outside of the armory.  The ceremony began with the 82nd Airborne Association drill team, presenting the colors. 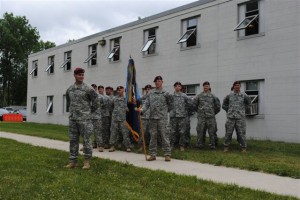 The new Adjutant General for the State of Michigan, MG Gregory Vadnais, was introduced and he conducted his part of the ceremony which included a reading of the history and honors of CO F.

Following that, CPT Adam Jenzen the Company Commander came to the podium and gave a great farewell speech for Company “F” which is included in full below. 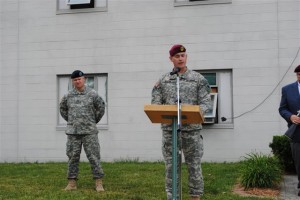 After his speech CPT Jenzen took his place before our company one last time and the Regimental Colors, were retired by simply encasing them.  A very austere ceremony, for an end to the greatest company the MIARNG has ever seen or will ever see again.

The National Colors were then retired and it was over.

And yes there were tears in the eyes of many of those present.

Thank you to former 1SG Ben Walker for his input to this post.

The FAREWELL SPEECH by CPT Jenzen

I would like to welcome all of our honored guests, friends, family, and former members.

I came to the unit in 2002 taking the position of unit armorer shortly after joining the Michigan National Guard following 4 years on active duty. I expected to serve a short time with Company F, just long enough to finish my degree, hopefully receive a commission and then move on to other things. Boy was I wrong…

Company F grows on you. Here, men were encouraged to constantly improve themselves through rigorous training that pushed soldiers to their limits. Those soldiers who choose to quit, were encouraged to seek units elsewhere. This mind-set instilled a sense of belonging to those who made it.

Through an established and well executed selection and training process basic soldiers were taught to become long range surveillance team members. With the support of their fellow soldiers, new recruits gained respect and earned their positions. Bonds were established through blood, sweat, and tears creating a warrior mentality that spurred self-confidence and devotion to the unit.

Company F became a home for these men, a sanctuary from the everyday world, where you were not judged on your social status, how much money you had, or what car you drove, but on your level of dedication and performance. The friendships that were made here and the sense of pride in each soldier and the unit as a whole is one of the reasons men chose to stay here, passing up promotion opportunities and career advancement in exchange for a true sense of self accomplishment.

Through the years, the men of Company F have prided themselves as being the most highly trained and tactically proficient soldiers in the Michigan Army National Guard. Through multiple overseas training events and two deployments we have demonstrated our professionalism and level of expertise. We have proven ourselves to be the best at what we do.

I wish that I could stand before you and discuss the unit’s future; unfortunately that is not the intent of this event.  Instead, I stand before you as the last commander of Company F. It is a solemn occasion, one that we hoped would never come. The men that you see here will be the last to don the red berets and proudly call themselves members of F Company, 425th Infantry.

We find ourselves in difficult times, being forced to make choices we would rather not make. Many of you have voiced your disdain and frustration at the events that have led to this moment. We have all pointed fingers, written letters, or searched for a course of action that we hoped could prolong this moment or alter the path we have been given. Unfortunately, the decisions have been made and the time has come for us to part ways.

I encourage you to brush off the chip on your shoulder and go forth, taking with you the lessons you learned while you were here. Develop new bonds and friendships, push your fellow soldiers to improve themselves, and pass on your knowledge and experience to others. Each of you have now been charged with the responsibility of being a representative of this Company. You must set the standard, and through your actions show others that while this unit may be gone, the principles we established and the professional soldiers we created live on.

Remember that you are and will always be a member of Company F. 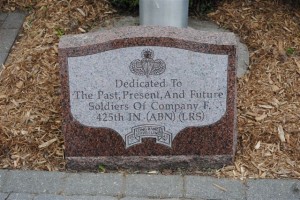 Now gone, but never forgotten – We, the 425th Regimental Association, now carry on the lineage and honors of the best LRRP company in the U.S. Army!

9 Responses to The Deactivation Ceremony (End of an Era, Part II)