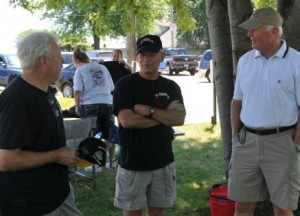 The joint picnic with the 82d Airborne Division Association was a great time for all who attended.  As usual there was plenty of food and beer.  It was great to get a chance to meet old friends from Co F days and to meet some of the new members and hear jump lies that took place less than 20 years ago!

The 82d Association was highlighting the 555th Parachute Infantry Battalion, the “Triple Nickel,” the only all-black parachute unit in the Army.  It was still undergoing training at Fort Bragg in 1945 when WWII ended and was inactivated in 1947 with other units at Fort Bragg.

The skydiving demo was great.  I wasn’t sure they would do it as the wind felt pretty strong, but then I was thinking of T-10 and MC1-1 days, not high performance canopies! 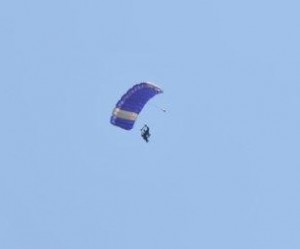 Of course, much of the conversation related to the inactivation of the unit.  Getting rid of a unit with the history and proven capability as Company F is proof that the Army often doesn’t think straight.  Basil Zaviski is taking the sign he painted for the armory at Selfridge and displaying it in the Bruce VFW Post.  Dick Anderson is working with the State HQ to have the Association take possession of many of the unit items, such as the Regimental Colors and Guidon.

In the future you will be able to find copies of the E-Newsletter that Ben Walker sends out on this website and Membership cards will be sent out in an email so you can print out your own.

Don Bugg is in the final stages of completing the unit history, so if you have a story or picture that you want in it, send it to him ASAP! 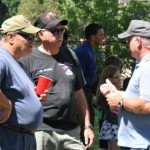 Phil Griglio, Ben Walker, Ed Klusman – Griglio heard there was going to be a jump, so he brought his own reserve! 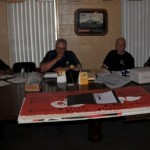 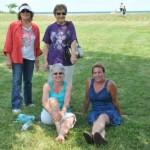 Some of the wives joined us for the day 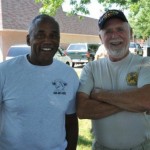 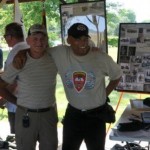