Veterans of Company F gathered at our old favorite Rally Point – Kennedy’s Irish Pub in Pontiac.  The gathering was an informal, somewhat spur of the moment event after this picture was posted on the Co F Group on Facebook.  The event was well attended with fellow Rangers coming from miles and states away.  Food and alcohol were consumed in great quantities, exercises were carried out again, and jumps remembered.  As the evening went on the marches grew longer, the jumps were higher or lower and the winds on the drop zone blew stronger.  It was a great night of camaraderie and jump lies and we plan to do it again next year! 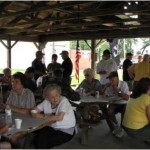 their annual picnic on the last Saturday of every year and the 425th Regimental Association is invited to share in the fun.  The picnic was a blast. Skydivers Pat Solar, Adam Wells and Art Farley came in on target even with the high winds.  The 555th PIR Assn had an eight panel display and videos playing all day. 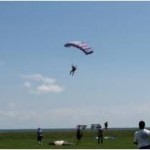